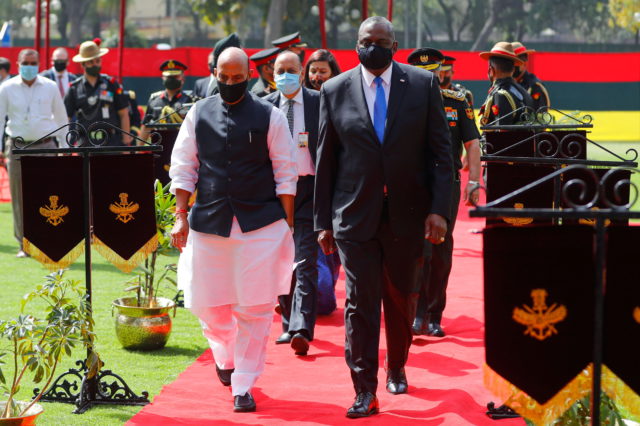 “We certainly urge all our allies, our partners to move away from Russian equipment … and really avoid any kind of acquisitions that would trigger sanctions on our behalf,” Austin told reporters in New Delhi.

No S400 systems have been delivered to India and so the possibility of sanctions was not discussed, he said.

The United States last year imposed sanctions on Turkey for buying the S400 system.India made an initial payment of $800 million in 2019 towards the Russian purchase and the first set of missile batteries are expected later this year.

Ahead of Austin’s trip, Senator Bob Menendez, chairman of the U.S. Senate Foreign Relations Committee, asked him to raise democracy and human rights concerns in his talks with the Indian government, as well reaffirm the Biden administration’s opposition to India’s planned purchase of the Russian systems.

Austin is making the first visit by a top member of U.S. President Joe Biden’s administration to India as part of efforts to forge an alliance of countries seeking to push back against China’s assertiveness in the region.

The leaders of the United States, India, Australia and Japan – countries together known as the Quad – held a first summit last week pledging to work together for a free and open Indo-Pacific and to cooperate on maritime and cyber security in the face of challenges from China.

“We discussed opportunities to elevate the U.S.-India major defence partnership … and we’ll do that through regional security cooperation and military to military interactions and defence trade,” Austin added.

The United States has emerged as one of India’s biggest arms sellers, and the two sides are also discussing India’s plan to buy armed drones from the United States as well as a large order for over 150 combat jets for the air force and the navy to help narrow the gap with China, Reuters reported on Friday.

Austin met Indian Prime Minister Narendra Modi on his arrival in New Delhi on Friday. He leaves on Sunday.